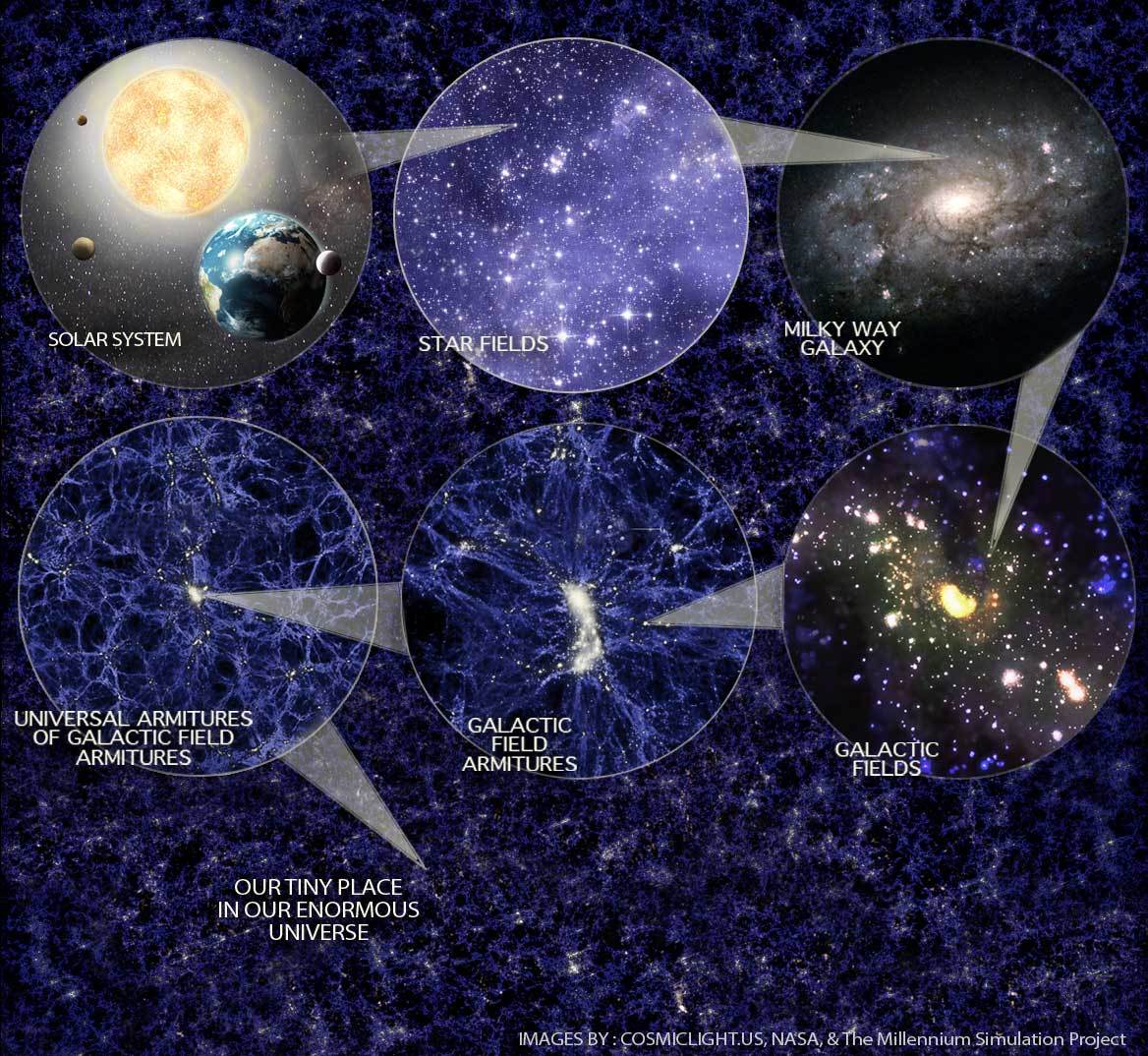 SCALE OF THE UNIVERSAL 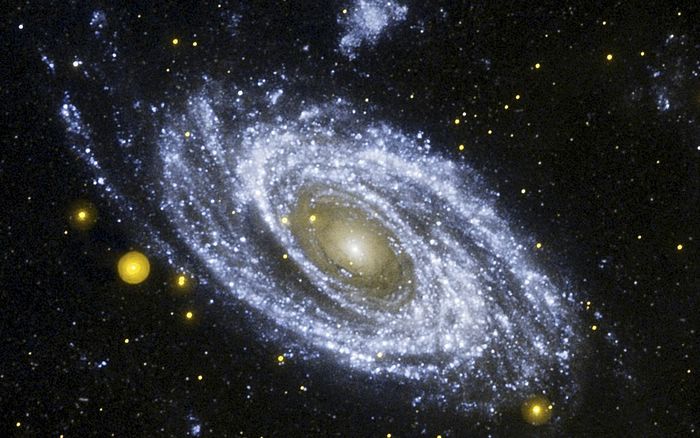 Galaxies evolve upon the armatures of universal creation

The images that follow display the universal structure and also to simplify the previous two sections of this website (Introduction and Galaxy Evolution).  The discussion of the universal creation method based upon the wavelength will continue thereafter.

All functions of the universal creation method are established upon thresholds and gradients of change.

One condition relies upon the previous condition.  Shifts in equilibrium and actions of energy will change the nature of anything.  One central argument in the theory of creation goes like this: was the universe created through extreme effort, as material manifest through great work from emptiness - OR - is the universal method designed from a condition of fullness, thus requiring only a simple nudge upon a universal substance that allows the entire manifestation to unfold as easily as a rock falls from a cliff.

EVOLUTION OF THE UNIVERSE 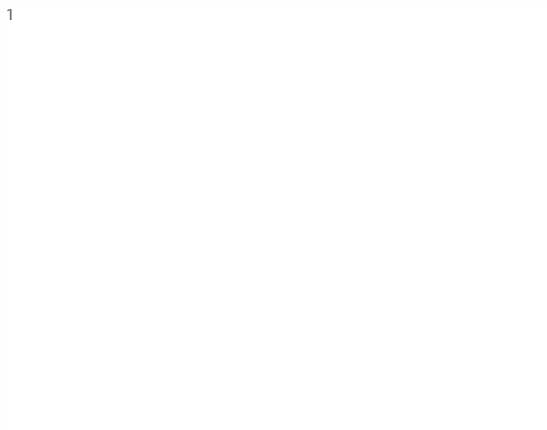 The light is life, ecstatic motion, energy itself. From this light comes the ability to extend into any condition that does not violate the principles of the light.

The light of fullness can only be itself, until it first divides it's fullness, and from that first division comes the first differentiation - the first mist of new energy and the initial building blocks of all existence. 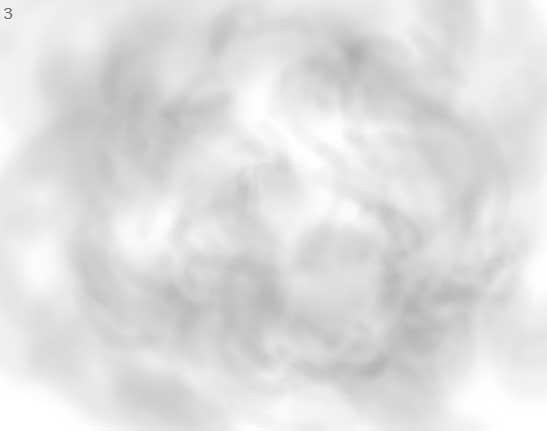 3) The Spread of Differentiation

From those first mists grew coalition of motion, as like conditions began to separate themselves from differing conditions. The increase of new creative efforts pushes further interaction. 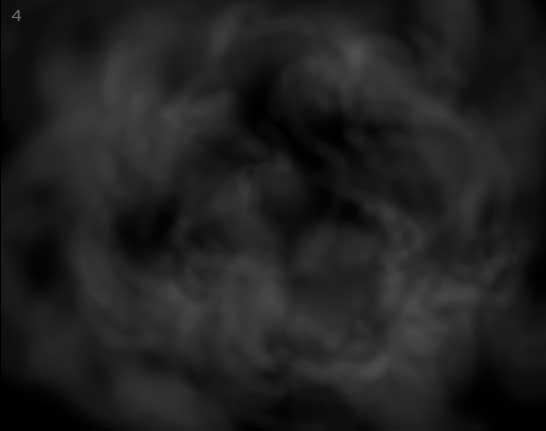 As the fullest potential of the Light removes from itself in order to create - we see not the fullest light, but only the creations.  What we see and feel is relative to our senses, senses cast from reality itself.  What we measure and understand is relative to the tools we can create.  In this image, we see the inverse, the material universe in our familiar condition where matter has appearance and the universal Light appears not. 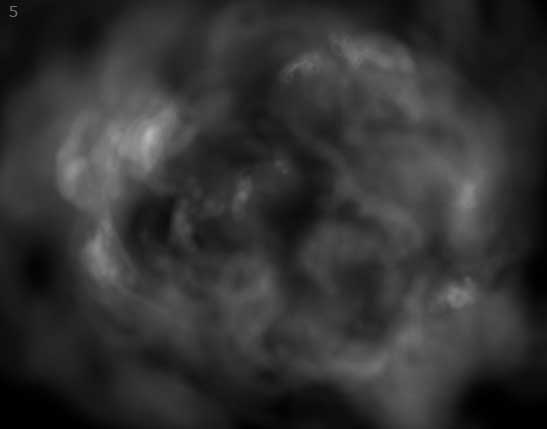 The motion of this energetic mist grew greater, and new pressure condition pressures began to emerge and condense centers of activity began to show. 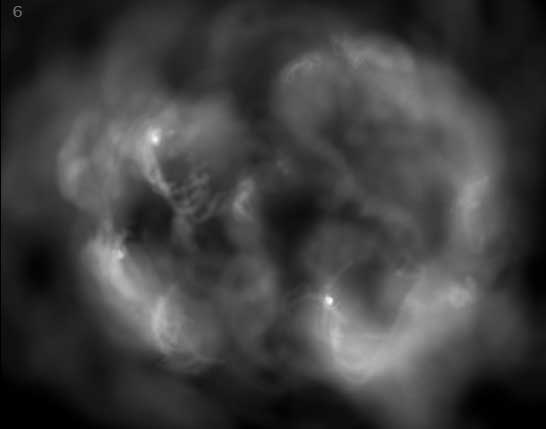 The division of the light reached towards it’s first creative threshold, as the division of energy siphoned downward towards the great compacting centers of stars or atoms that will progress and evolved down the pipeline of energy thresholds that define all matter. 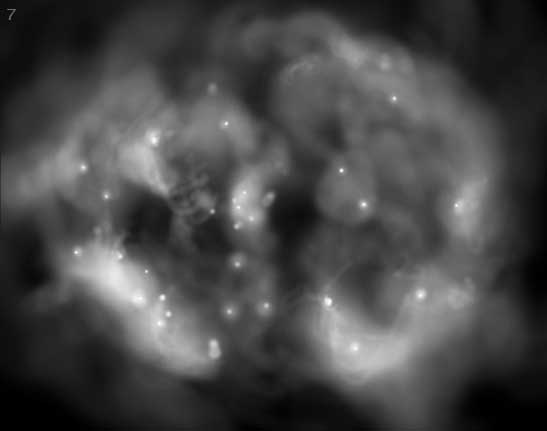 Continued activity led to more centers being established and their own movement begins to transcend the ongoing motion of activity. A new gradient of star motion began to exceed the subtler gradient of motion of the mists. 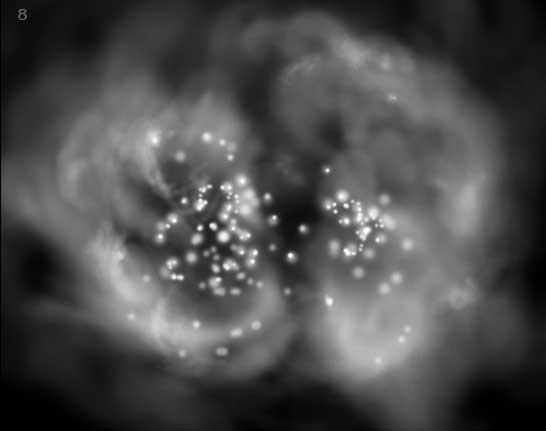 The motion of stars began to take on a centralization of their own, if that motion prevails. 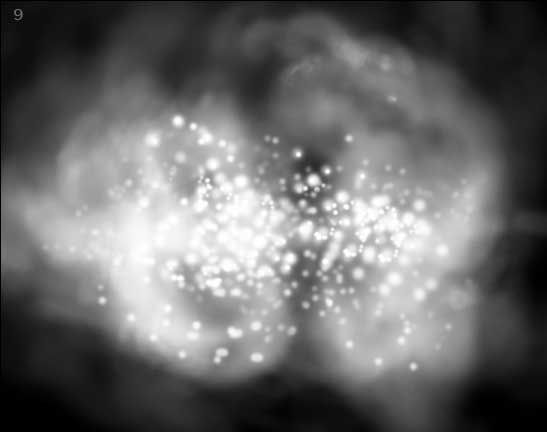 The interaction of this new layer of potential, the motion of stars, can begin to take on a gravitational center of its own. 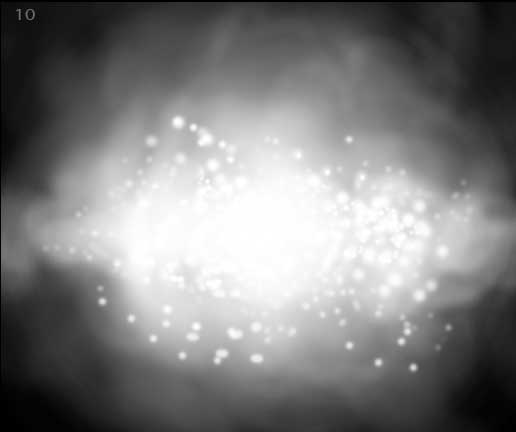 A final surge in opposition to the nature of the mist, leads to the chain reaction that diffuses it, in completion of the new layer of potential as the stars begin to merge into one great developmental center of activity. 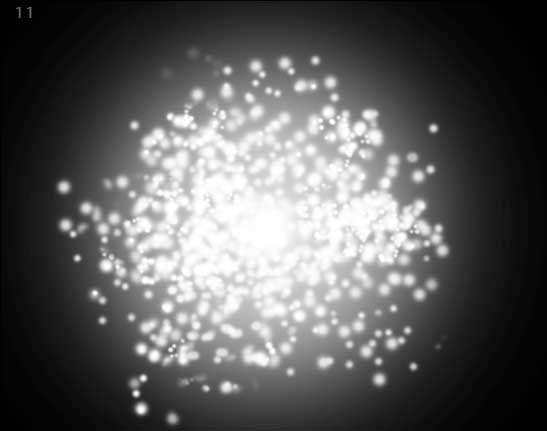 The nebulaic mists are cut off in potential and some revert to the original condition, and the rest is pulled into the stars. 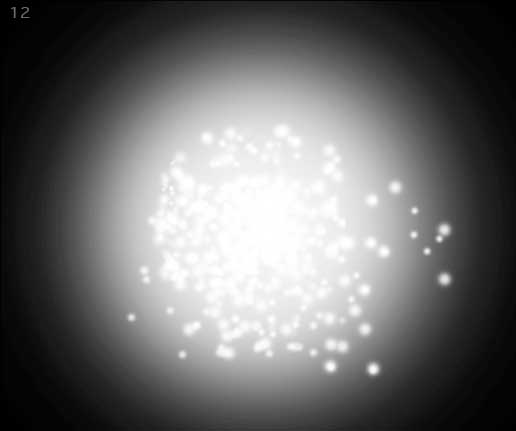 A galactic core is progressively established as the stars are consumed and merged into a single gravitational track, and begin to combined in an energetic center that will last billions and billions of years. 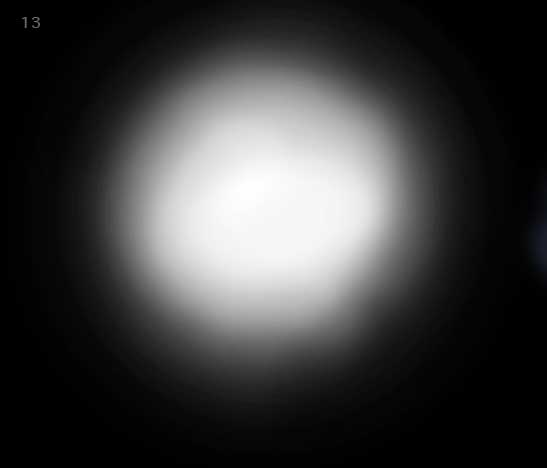 The established elliptical galaxy core will establish its own layers of internal pressure zones, much like stars. they will radiate light profusely, and eventually this round sphere will start to compress into more oval appearance as the gravitational poles evolve and elliptic begins. 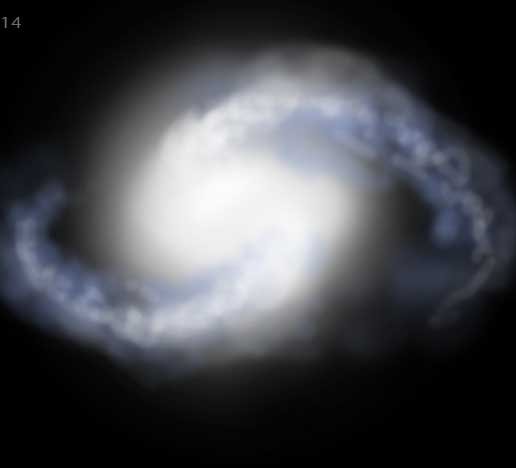 From the galaxy core, orbital patterns will emerge, as the gravitational system develops, the poles spin, and the leading edge moves, leaving a trail of ejected matter behind - a new nebulaic mist that will develop stars of their own, and those stars might create planets and establish solar systems, just like our own. 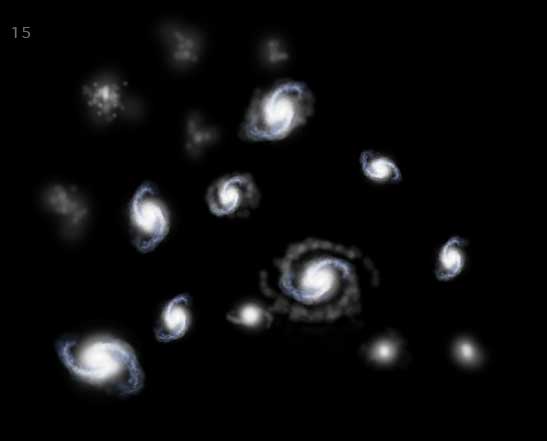 This is the same process occurring all throughout the universe, and on every level - an alternating current allows building blocks to be made from the dynamic universal condition.

The universe exists on what we know as dimension.
Without dimension there is only oneness.

The universe does not build material forms only - it also builds the negative space necessary for forms to exist.

The evolution of form take one stage of the division of light into form to each new threshold. This walk requires an equal visit to both sides of the one spectrum.

The space that surrounds the forms of the universe is a structure, no differently than the structures of material form.

The undulation between both sides of this opposed spectrum constitutes the stepping stones needed for all matter to exist.

Space, Time, Matter are not seperate things - for the universe to exude itself, it can only create variance in the singular substance that composes all universal things. That substance is Light.

For creation to occur at all, all aspect of that Light must change itself in some variation. And in all such acts of creation - all dimensions are created all at once.

Light expresses itself in all ways that are universal. This means that as the first 'thing' is created (a subtle change in energy) what is occuring is a simple switch, from the Light of totality to become subtly different along that which defines the components of reality. Those changes register along the 'dimensions' of existance. These dimensions are the definitions of Light, the topic we will move towards next.

DIMENSIONALITY IS CREATED BY THE UNIVERSAL METHOD

- Each step of the way, magnetic pressures alternate with electric pressures.

- Radiation occurs on the thresholds that alter, or wash away, electric activity.

- Compaction occurs on the thresholds that bind space into smaller forms

The universe is an overlapping system of pressure zones that exist in gradients,

And those gradients change according to thresholds. The thresholds are what separate one type of matter from another, one environment from the next, and the overlapping types of matter that co-exists, such as how a...

hailstone exists inside a cloud,

inside a planetary elliptic,

inside an electro-magnetic galactic structure, etcetera

‘Gradient’ is one way of describing the way the densest part of something fades into a less dense part, until the very edge, where one form ceases to exist and another form begins...

The core of a hailstone is coldest and hardest.

The edge of the hailstone is melting already.

The melting liquid is evaporating into the sky.

The evaporating liquid is carrying a tiny zone of humidity

The humidity fades into the general state of the sky.

Universal pressure zones are made, and they affect each other all the time.  They overlap, they degrade each other and add to each other in different ways.

The universal method creates zones of differentiation that sprout new zones that methodologically sit ‘on top’ or ‘below’ the previous zone, yet physically these new zones rest inside or around the previous zones. This occurs is by multiplicity-of-self or division-of-self through a parenting structure.

One environment overlaps itself in potential enough to cross some portions of itself into a new threshold that enable a ‘locking threshold’ to take hold.

That new potential zone becomes a new object that cannot automatically be physically un-created/destroyed by the original zone. This delay in deterioration back to the original state constitutes existence.

The entire universe is constructed,
each pressure zone,
one by one.